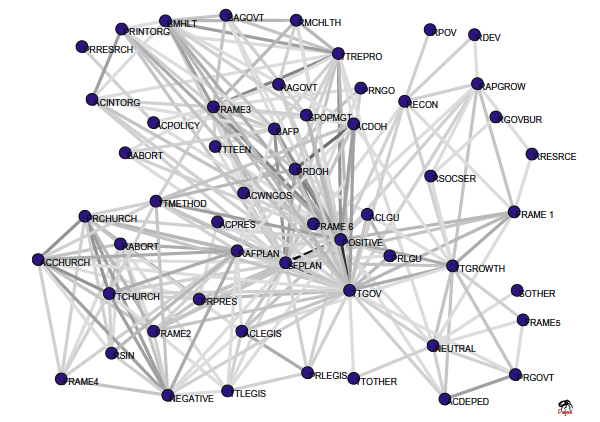 Framing, in its specific application to media research, is defined as the “central organizing idea for making sense of an issue or conflict and suggesting what is at stake.” It can be found in various disciplines of the social sciences, most notably in political science, psychology, and communication research. Due to the fuzzy nature of frames, identifying them has proven to be quite complex. Here, we perform framing analysis on a corpus of news texts on the population and family planning issue in the Philippines by operating two varying approaches: human-based and computer-assisted. A singular holistic approach to framing is initially implemented where coders/domain experts classify each news text to a specific pre-defined frame. This traditional approach is known to raise serious issues on the reliability and validity of the results mainly due to human’s intrinsic biases. To address such issues, we propose a novel technique that synergically combines the method of Matthes and Kohring (2008) and complex networks approach. In our model, the codings of texts are cast as a network of content analytic variables (CAVs). Our proposed method tackles the clustering issue that MK raised, which plagues framing scholars in the quantitative identification of news frames in texts. Moreover, the research is significant on a societal level as it also aims to gain perspective for reasons on the lack of progress in discussions about suitable population policies in most developing countries like the Philippines.