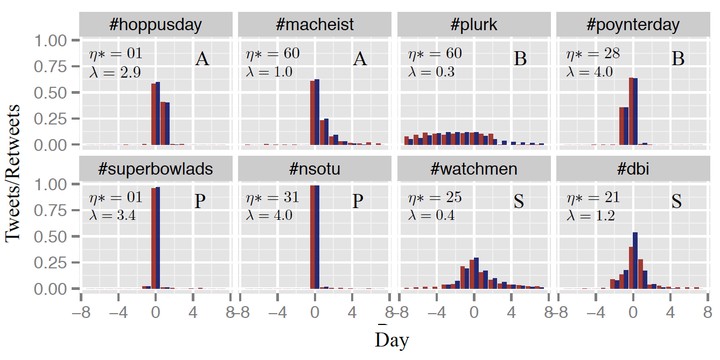 The advent of the era of Big Data has allowed many researchers to dig into various socio-technical systems, including social media platforms. In particular, these systems have provided them with certain verifiable means to look into certain aspects of human behavior. In this work, we are specifically interested in the behavior of individuals on social media platforms—how they handle the information they get, and how they share it. We look into Twitter to understand the dynamics behind the users' posting activities—tweets and retweets—zooming in on topics that peaked in popularity. Three mechanisms are considered: endogenous stimuli, exogenous stimuli, and a mechanism that dictates the decay of interest of the population in a topic. We propose a model involving two parameters η* and λ describing the tweeting behaviour of users, which allow us to reconstruct the findings of Lehmann et al. (2012) on the temporal profiles of popular Twitter hashtags. With this model, we are able to accurately reproduce the temporal profile of user engagements on Twitter. Furthermore, we introduce an alternative in classifying the collective activities on the socio-technical system based on the model.